It shags the mind!

As announced earlier, I’ve been streaming and I even got around to editing it. It was good to get back to it. It was tough that it’s still so hot around here. It wasn’t so good that I forgot so much of my best practices that I still wasn’t able to start on time with no technical glitches. This is the place where I’d like to say “live and learn”, but for some reason it doesn’t want to apply to me.

Did I ever mention I’ve got a sweet spot for esolangs? 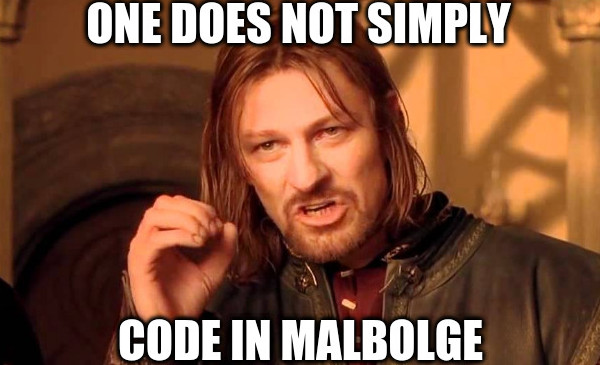 Classic brainfuck is generally classified as a Turing tarpit, though IMHO in that category it’s really far from being the worst offender. Its mode of operation is actually very similar to an “actual” Turing machine, with the transition table replaced by a reified structured AST.

It’s probably the most popular esolang there is. Its unforgettable name may have a lot to do with it. But its ease of implementation undoubtedly played a part too.

Its stated design goal on first release was to have the smallest possible compiler. Indeed, that language is much easier to compile than to interpret. The original compiled to Amiga machine code, but it’s just as easy to compile to Perl. Let’s do just that.

You can check out the CG puzzle for details on the specific dialect that’s expected. For a more general summary:

Brainfuck instructions directly map to the Perl ones! We can compile programs by simple text substitution:

Of course you noticed I left out the looping instructions. They’re the part that can make interpretation slightly more complicated, as the interpreter will have to track which opening square bracket matches each closing one. But… there’s no such issue with a compiler. We can directly convert each bracket individually, and leave the pairing chore to the host language!

In my experience advocating TC languages, I’ve noticed the population splits roughtly half-to-half on whether their subconscious self accepts the possibility of generating unbalanced fragments of host curly braces. If you need to, take a while to ponder what the resulting code ought to look like, and why the scheme works. In the meantime, we’ll be trying out our new feature. 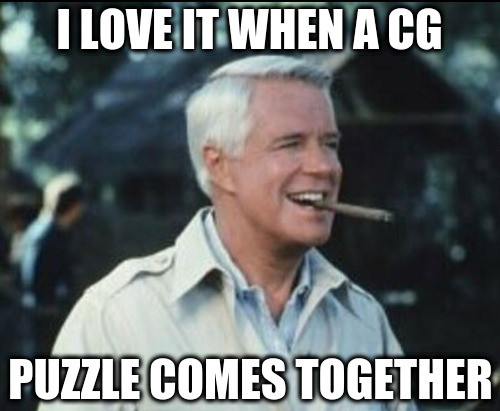 The CG puzzle made a few specific design choices that we have to take into account. Here’s the list; check out the stream for the actual implementations.

That about sums it up for compilation. +50 XP, ka-ching!

Claim: the core issue writing a brainfuck interpreter is how to handle loops.

The tricky aspect of loops is that in brainfuck they’re what most languages would call “while” loops.

These can run, on a lower level, as something like this:

With peephole vision, this entails:

Take a while to understand how this is worse (harder to compile) than a “do”/“repeat” looping construct. 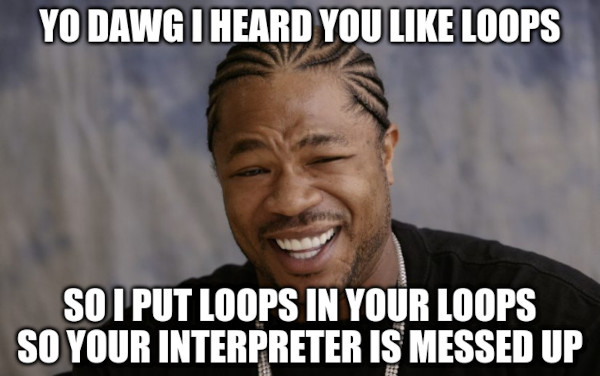 This cycle is the root cause for why simple interpretation strategies will necessarily have a wart of some sort. Here are some coping strategies:

The stream expresses my dismay at the clunky situation the CG puzzle puts us in: we’re supposed to write an interpreter, but we have to detect malformed code statically before it’s noticeably bad. How un-interpretey!7 Well, that ship has sailed, no need to brood over it any longer.

With that out of the way, let’s bite the bullet and write the parser. Haskell really shines in parser combinator technology, it’d be ridiculous not to use them.

A brainfuck program is a sequence of “actions”, an umbrella term I’m introducing to be able to split between the six atomic instructions and the loops. That’ll make for a simple AST.

The parser is then little more than expansion on that structure. With a bit of careful thinking to dodge the edge cases (why that satisfy (/= ']') is necessary for correctness, for instance—watch the stream for the details). And a bit more thinking to gracefully integrate the comments’ parsing8 (ditto).

It’s worth noting that handling comments takes a lot of space compared to the Perl-based compiler. Here we need to explicitly ignore them, and that’s the major cause of the program parser’s complexity.

Now the hard part is done, the implementation is just a simple9 fill-in of each instruction. And the definition of a brainfuck interpretation monad using the mtl.

I’m not expanding on the zipper data type, it’s not too relevant now when the stream has enough details. Same for onTape and onInputs, they’re simple ad-hoc10 lens over BfState.

So really, the complex part is just the looping. If you squint past my keystroke aversion, its implementation is just reading the tape, checking for zero, and either doing nothing or running one iteration before trying again.

And that’s all there is to it!

Ok, ok, it’s not. We need to take care of the puzzle’s idiosyncratic error management. Fortunately, the mtl’s got our back covered.

We just insert an Except monad there12. This is akin to allowing our computation to return an Either error result type13. Given the way we handle errors, which side we insert it is mostly irrelevant14, but this one will make our life easier later on.15

We can then integrate error handling to the flow. For example instead of simply deferring the > instruction to the tape zipper, we’ll detect overshoot like this:

…at the cheap cost of making two of our helpers monadic. Details in the stream.

The advantage of using the common Except interface is that we can share the same error management between the runtime errors thrown during interpretation and the parse-time “syntax” errors. With a bit more fiddling, we can actually reduce the number of calls to putStr to a single one. I’m quite happy with how the toplevel function turns out.

The only remaining infelicity, IMHO, is the partial match to Right output. It’s guaranteed to succeed since the code structure, runExcept (... `catchError` pure), can’t possibly return a Left. But I haven’t found a suitable way of shifting that knowledge to the code syntax. Yet.16

So there you have it. A full brainfuck interpreter in Haskell using nothing but standard libraries even CG has, and wacky error management to boot!

That’s a great question. It has multiple answers, depending on which aspect you’re interested in. And then some.

My currently published solutions in Perl and Haskell are subtly refined versions of the ones presented on stream and here. Drop a comment there or elsewhere if you notice anything wrong.

Yeah, this wall of text is long enough as is. Glad to have had you, hope you enjoyed the read and see you next time!