I have great trouble determining whether I’m the competitive kind. I certainly don’t consciously feel like I am: I dislike the artificial antagonism that comes with it, and the idea of ranking high isn’t enough to compensate for the projections of the grinding that’s required for it. Especially if the contest is open for a long time. On the other hand, I do take part in a broad spectrum of competition-like activities, in and out of CS. Chew on that, armchair psychoanalysts!

So CG came up with quests. Why not.

I’ve been on CG forever, and I’m not even through with all of them yet. I still need to “improve” my optimization ranking.1 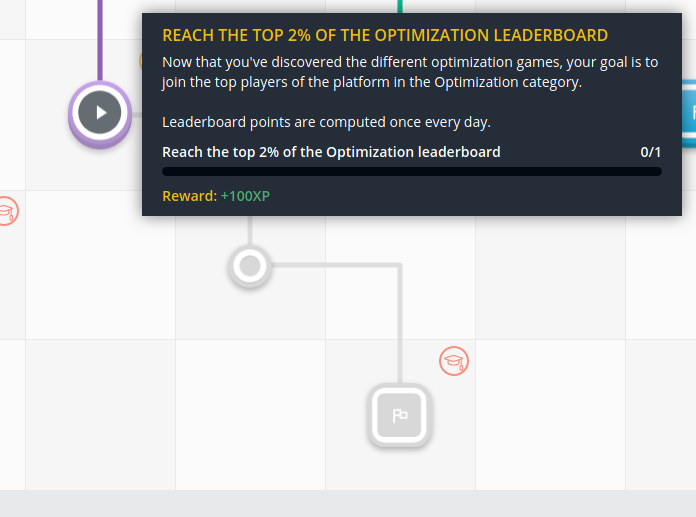 I’ve expressed my concern on the chat, and the feedback was mostly condescending: “just do it”, “not any more than the clash, multi-legend or invites ones”, “yes and that’s a good thing”.2

I can cope with the just-doing-itness of it. I intend to, anyway. There isn’t anything to dispute to those who like it this way, so let them have it.3

I still disagree with the whataboutism aspect of it. Clashing is an open ranking. You can reach the top, even first place4 with sufficient time and motivation. Legend in a multi is the same: the bots are now fixed, all that’s needed is an AI that beats their general level, in context.

There exists such an easy phrasing to resolving the issue for optimization: “solve enough optimization puzzles with a high-enough score that your total optim-related CPs are above the 2% threshold at the correct time of day.” It actually is a correct answer to the strawman complaint that I wouldn’t know how to achieve it. But not to my initial concern. That “solution” is neither open nor fair. The optimization leaderboard is a closed one: points scored there never go away. Sure, they “fade” with people coming up with better solutions, but there’s a ceiling at which point they don’t anymore. So the 2% threshold depends very directly on the score of the people within, and as people’s scores improve, it will never go down.

So it’s unfair? Well, not yet. Saying the 2% threshold will never go down is actually wrong too, since the population it’s tallied on can only grow too.

Hard to tell in advance. I’ve started plotting the figures to at least grasp the trends. I wish I had taken the time to do it earlier, I’m pretty sure there were much more salient changes when the quest map was introduced, but for now it’s only guesswork. If you know of a way to extract the information post-hoc, please let me know.

So on this very short time frame, the rank to reach climbed slightly, as did the amount of required CP. Strictly speaking, harder, but not really noticeably so yet. Nothing to see here5, move along.

Until then, I’m stuck in decision fatigue. Send coaching proposals my way, please! Which puzzle should I pursue first, and how hard? 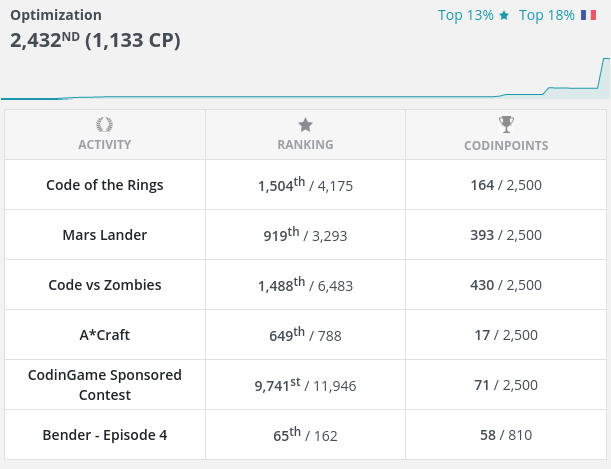